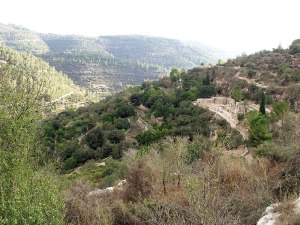 WHY GO?
Open Up Your Eyes
Jerusalem may hog the headlines but its surrounding hillside region, aside from Bethlehem, is virtually off the tourist map. Not for long. The new Open Skies agreement between the EU and Israel means that the number of cheap flights arriving from Europe is set for a rapid rise in the coming years. EasyJet, Wizz Air and others have already bumped up their flights to Ben Gurion Airport, 50km from Jerusalem, causing national airline El Al to recently launch its very own low-cost service called UP. This sudden influx of European travellers is sure to bring big changes to this rustic region.
With its high altitude, historic villages and lush forests of cypress, pine and olive trees, the Jerusalem Hills resembles a little Tuscany in the Middle East. Indeed, gourmet restaurants, boutique wineries and chic hotels such as the Cramim Spa Resort have been springing up in the ‘Judean Wine Region’. But here the cuisine is usually served with pita rather than pasta. And word is getting out that some of the best hummus in the world is served in towns like Abu Ghosh.
Geographically, the Jerusalem Hills includes the limestone Judean Mountains (Jibal al-Khalil in Arabic) that form part of Israel and the West Bank. But despite the bad PR, travel to the region has been generally safe in recent years and many are hoping that the tourism boom will bring a peace boom.

• Hike in the woodland hills of the Sataf Nature Reserve, home to orange groves, caves and two natural water springs, the size of swimming pools. Nearby, at the foot of Mount Eitan, picnic in style at a gourmet goat cheese farm run by an eccentric cheese maker who resembles Gandalf from The Hobbit.
• View Jerusalem as a giant at Mini-Israel in the village of Latrun, with its realistic replica models of Israel’s major sites, which are great fun for kids. Then sample some wine brewed by Trappist monks at the Latrun Monastery, with its 19th century Byzantine-style church draped in bougainvillea and surrounded by idyllic vineyards.
• Cycle one of the great routes of the world from the town of Beit Shemesh to Jerusalem along a 30km-long dry riverbed valley. The real reward for your efforts is ending the trail at the lofty Yad Kennedy memorial, near the biblical-era village of Ein Karem, offering unrivalled vistas of the seven hills of Jerusalem.

• The forests around Jerusalem welcome people to plant saplings for the Jewish festival of Tu Bishvat, the New Year for Trees, from 4-6 February.
• The Jerusalem Light Festival juxtaposes the famous walls of the Old City with 3D laser shows, huge video projections and luminous installations in the first week of June.
• Bethlehem bursts into life on 24 December as thousands of wise men and women flock to the Church of Nativity to see the grotto where it is said Jesus was born. Whatever your beliefs, it’s a Christmas Eve you’ll never forget.

TRENDING TOPIC
The seductive allure of peace in our time. The ongoing struggle between Israel, the Palestinian Authority and the US to negotiate a peace deal continues to occupy the front pages. But in this region, peace is not just about words but actions. Volunteers can support a host of coexistence charities working in the Jerusalem Hills. Jews, Muslims and Christians already integrate on a daily basis in towns such as Abu Ghosh and the Neve Shalom (Oasis of Peace) Kibbutz, a cooperative village founded by Israelis and Palestinians.

RANDOM FACTS
• The Sorek Caves, a 5,000-square-metre underground network of stalactites, stalagmites and rock pillars, was only discovered in 1968 while quarrying with explosives.
• Bethlehem in Hebrew is written as Beit Lechem, meaning ‘House of Bread’ but in Arabic it is written as Bet Lahm, meaning ‘House of Meat’.
• The new mega mosque in Abu Ghosh, the second-biggest in Israel after Al-Aqsa in Jerusalem, was donated by Chechnya, as many residents claim to have Chechen roots.

DEFINING DIFFERENCE
On the way to Jerusalem you may notice your ears pop. This is because the Old City is situated in an elevated position some 760 metres above sea level, meaning the Jerusalem Hills enjoys a slightly fresher climate than the rest of Israel. But don’t be fooled, 300 days of the year, this region still roasts.

REGIONAL FLAVOURS
Think hummus is just a dip? Well, not in the Jerusalem Hills, where hummus is considered as holy as the Western Wall or the Dome of Rock. No town worships this chickpea dish more than Abu Ghosh, dubbed as the ‘Capital of Hummus’ by the Guinness Book of Records (it once held the world record for the biggest portion of hummus, which weighed four tons). Here, hummus is usually served hot, like a bowl of thick soup, with tahini, herbs, pita bread, green olives, pickled cucumbers and finely chopped salads.